Exmouth is located 1270 kms north of Perth and is one of the most popular all year round coastal tourist towns in Western Australia.Exmouth’s first ‘visitor’ was by Dutch Captain Jacobz aboard the Mauritius in 1618. The ship was travelling to Java and landed at Exmouth by error. Australian Captain Phillip Parker King visited 200 years later in 1818 and named the peninsula North West Cape. He also named Exmouth Gulf after a British Royal Naval Officer.

During World war 2, Exmouth was used as a submarine re-fuelling base and became famous for a military operation called..”Operation Potshot”. The operation repelled advancing Japanese forces.

In 1967 a joint effort between the Australian and USA governments saw the creation of a communications base and Exmouth became a gazetted town. Today, Exmouth is a thriving tourist town as well as supporting an important fishing industry.

As Exmouth experiences no official wet season, the town is an ideal all year round travel destination. One interesting bit of trivia is Exmouth’s record wind gust speed of 267 KMH on the 22nd March 1999 during Cyclone Vance.

Accommodation at Exmouth ranges from unpowered tent sites to luxury self-contained apartments. (Although there is plenty of accommodation available, I personally believe that it is best to book ahead so that you get the accommodation that YOU want. There is nothing worse than turning up in an isolated town and not being able to get good accommodation and this happens in peak periods ).

Exmouth has fantstic natural attractions both on the land and at sea. From the Ningaloo Reef offshore to the Cape Range National Park 40kms south of the township, there will be something of interest to all visitors to Exmouth. 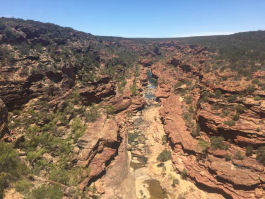